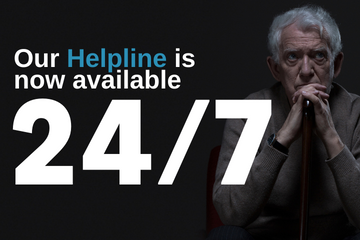 Today, Hourglass, the only charity in Scotland focused on tackling the abuse and neglect of older people, is launching the UK’s first 24/7 helpline as part of a major push to bring the “hidden epidemic” of abuse experienced by older people out into the open and get victims the support they need.

As many as 2.7 million people are thought to be affected by the abuse of older people in the UK, with upwards of 225,000 victims in Scotland, yet new data from the charity’s helpline shows only a fraction of those victims (0.2%) are accessing the helpline to get specialist support from Hourglass.

Thanks to funding from the UK Home Office, the 24/7 helpline means anyone can call, day or night and the 28% of people who sought help in 2021 outside of office hours will now get the support they need. The Home Office funds cover England but the charity needs support from the Scottish government to ensure service is sustainable in Scotland.

“The Pandemic increased social isolation, the social care crisis, a stretched criminal justice system, a lack of public awareness, all have contributed to unacceptable levels of abuse being experienced by older people.

“Thankfully we are increasingly aware of other forms of abuse like child abuse and domestic violence, but the abuse of older people remains in the shadows even though it affects millions. So many people are suffering and don’t know where to turn for help. We must bring it out into the open and support older people who are experiencing it to get the help they desperately need.

“Our helpline going 24/7 is an important step in doing that and I urge any individuals or organisations who care for older people to promote as far and wide as they can.”

“It’s scandalous that such a widespread form of abuse remains firmly under the radar. Because it’s so hidden in our society, we are making it incredibly hard for those experiencing it to seek help.

We must shine a light on it, destigmatise being a victim of this form of abuse, banish any feelings of shame and show there is help and understanding out there for those it affects – the helpline going 24/7 is brilliant but we all have a role to play in supporting victims.”

The helpline is also for family members concerned about an older relative/friend, as well as those within the health and social care and criminal justice sectors. The charity is calling on all people and professionals who support older people to reach out, whatever time of day, if they are concerned about abuse, and to promote the helpline number as far and wide as possible.